Father, Thank You for Being My Servant King – 30 Days of Thanksgiving – Day 21

“You know that those who are considered rulers of the Gentiles lord it over them, and their great ones exercise authority over them. But it shall not be so among you. But whoever would be great among you must be your servant, and whoever would be first among you must be slave of all. For even the Son of Man came not to be served but to serve, and to give his life as a ransom for many.” – Mark 10:42-45

Can you think of an earthly king who would stoop down to the lowest position of service? Even in our world today primarily composed of democracies, those in high positions of government or authority have staff that waits on them hand and foot. You would probably be shocked to see someone in this position taking time to serve one of his employees.

Our King is unlike any earthly king, though. This King didn’t think His heavenly glory was something to be held onto, but instead took on lowly, human flesh and was born into poverty in a stable. (Philippians 2) This King spent His life on earth serving and loving the lowest and the outcast. He didn’t consider the diseased, disabled, or even demoniacs beneath Him, but He instead lovingly touched, healed, gave, and forgave each one. Of course, His greatest act of serving was to give His very life for His enemies. He took the punishment we deserved and paid the debt we owed. This King of kings will one day serve us at His table in His eternal kingdom.

If our King serves us in this way, shouldn’t we serve one another with joyful hearts? Is there anyone beneath our love and care?

Jesus, knowing that the Father had given all things into his hands, and that he had come from God and was going back to God, rose from supper. He laid aside his outer garments, and taking a towel, tied it around his waist. Then he poured water into a basin and began to wash the disciples’ feet and to wipe them with the towel that was wrapped around him…When he had washed their feet and put on his outer garments and resumed his place, he said to them, “Do you understand what I have done to you? You call me Teacher and Lord, and you are right, for so I am. If I then, your Lord and Teacher, have washed your feet, you also ought to wash one another’s feet. For I have given you an example, that you also should do just as I have done to you. Truly, truly, I say to you, a servant is not greater than his master, nor is a messenger greater than the one who sent him. If you know these things, blessed are you if you do them. (John 13:3-5, 12-17)

PRAISE: Give praise to your King for serving you in love.

THANKSGIVING: Thank God for His example of servant leadership and His continual acts of service on your behalf.

CONFESSION: Confess to God your desire to be served rather than to serve. Ask God to remind you of His loving example of sacrifice for those who do not deserve His grace.

FURTHER STUDY: Breathe in the truth of God’s Word and respond to Him in prayer.

Enter your email below if you would like to receive daily posts to your inbox. 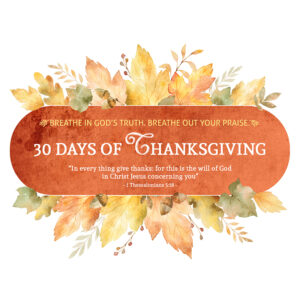