6. Jesus Made the Blind Man See

Jesus had already healed many who were blind, crippled, and sick by this point in his ministry. John begins telling this sign, however, with a question posed by the disciples. Christ brought to their attention a man who was blind from birth. His disciples immediately ask Christ what they deemed to be a very reasonable question. They had grown up being taught that all suffering was an immediate result of sin. If someone suffered financial or physical loss, it must mean that God was punishing them. They wanted to know if this man suffered because of his parent’s sin or his own.

Jesus didn’t say that the parents or son were sinless. However, He told them that his blindness was not a punishment for their sin. Instead, this trial was designed so that God’s glory would be put on display. He then displayed His glory by healing Him.

Jesus had spoken healing over those whom He had healed previously. In this case, He did something very different. He actually spat on the ground and made mud with his hands anointing the man’s eyes. He then told him to go wash in the Pool of Siloam. John is sure to tell us that the meaning of the pool’s name is “Sent.” Every single aspect of Christ’s works was purposeful, and John’s retelling of each detail was also purposeful. Just as the lame man was healed in a place called “House of Mercy” this blind man was told to wash in a pool named, “Sent.”

Of course, just as the many other times before, Christ was performing this miracle on the Sabbath day. The act of making mud in the eyes of the Pharisees was considered work. They began to question the man who had been healed trying to disprove Christ. They were so determined to disbelieve, that they even had the man’s parents brought in to testify that he actually was their son who had been born blind.

Notice the difference between the blind man who was healed and the lame man. While the lame man didn’t show any response of belief or acceptance of Christ, this man was unafraid of the religious leaders. He challenged their unbelief with the most basic fact that they wanted to ignore.

“Why, this is an amazing thing! You do not know where he comes from, and yet he opened my eyes. We know that God does not listen to sinners, but if anyone is a worshiper of God and does his will, God listens to him. Never since the world began has it been heard that anyone opened the eyes of a man born blind. If this man were not from God, he could do nothing.”

After he had been cast out of the synagogue, Jesus sought Him out and asked if He believed in the Son of Man. After revealing Himself to the man formerly blind, this man responded in belief and worship. Christ then made a powerful statement about those who were spiritually blind but claimed sight. 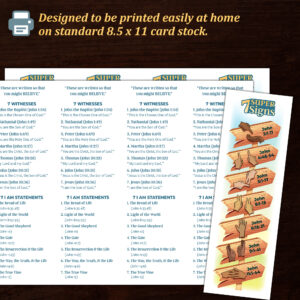