Put On Your Armor – Identity in Christ Part 5

For though we walk in the flesh, we are not waging war according to the flesh. For the weapons of our warfare are not of the flesh but have divine power destroy strongholds. We destroy arguments and every lofty opinion raised against the knowledge of God, and take every thought captive to obey Christ. (2 Corinthians 10:3-5)

Not only has God freed you from sin’s power and penalty, but He equips His children with heavenly armor to do battle against sin and Satan while here on earth. You have been given everything that you need to protect your heart and mind against the lies of sin and darkness.

It is often easy to confuse your true enemy. You were never called to use the weapons God has given you to fight against other people. All humans are either beloved brothers and sisters-in-Christ or image bearers that God desires to make His children. You have been called to fight against sinful lies from without and even within your own heart. These are lies that would exalt themselves over what we know to be true about Jesus Christ, His Word, and His truth about His creation.

Your greatest offensive weapon is the Sword of the Spirit, the Word of God. This is the most important weapon to fight sin. It’s a precise dagger of the truths found in God’s Word and spoken by you to attack sinful temptations that come your way. Memorize and meditate on His promises, so that you will be ready to fight! Remember, though, you have NOT been called to fight against people, but to battle sin and help rescue people from the lies that would destroy them. So speak God’s truth to yourself and others graciously with God’s love and seasoned with the salt of the gospel.

Read the following passages slowly and meditate on the truths found within. You may want to commit one or more passages to memory.

Be sure to respond to God as He reveals or reminds you of truth about Himself. Every time you read God’s Word, God’s Spirit is inviting you to enter into a conversation with Him. Breathe in His truth with a humble, teachable heart, and breathe out your response of praise, thanksgiving, confession, and repentance as is fitting.

Each truth given corresponds with one of the images in the original Identity of Christ design. These are available as downloadable coloring sheets or downloadable, customized prints that can be hung as decor in your home or office.

The shield that bears the truth of your identity along with the image of the short dagger are reminders of your heavenly weapons graciously given to you from God the Father. 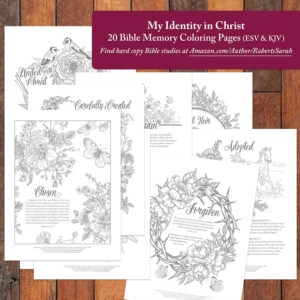